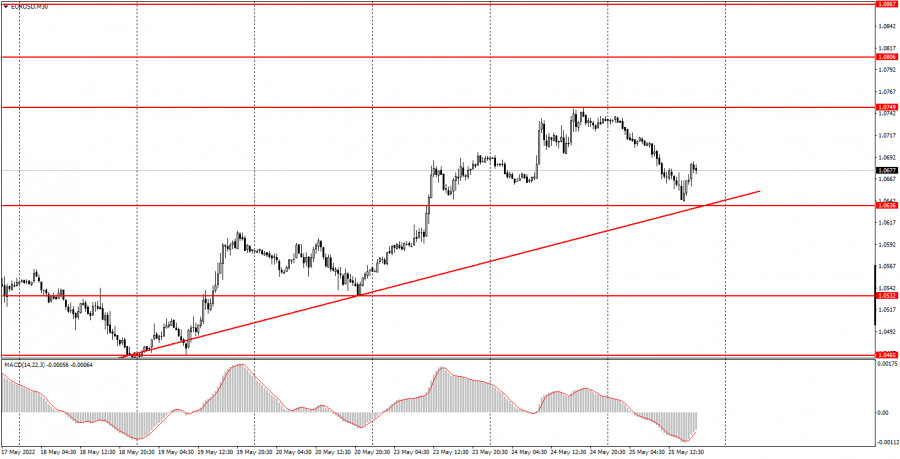 On Wednesday, EUR/USD was going through a correction within the current uptrend. The trendline remained relevant for the whole day and the pair had almost tested this level. Yet, it failed to reach the line and pulled back from it. We cannot say now that the uptrend has finished. At the moment, the factor supporting the euro is of pure technical nature. Do not forget that the euro/dollar pair has been declining for a long time, which is why the extended correction has started. It looks rather weak on higher time frames, which means that the euro has a good chance to grow further. Yesterday morning, ECB President Christine Lagarde made a statement, but this time, markets did not learn anything new. The most important thing was announced on Monday: the ECB is going to bring the rate to positive territory before the end of Q3 for the first time in a long time. The US published the data on durable goods orders, which turned out to be slightly worse than expected. It was at this time that the US dollar bounced off the trendline and started to rise slowly. This means that traders reacted to this news although the reaction was not strong and moved the quote by only 30 pips. 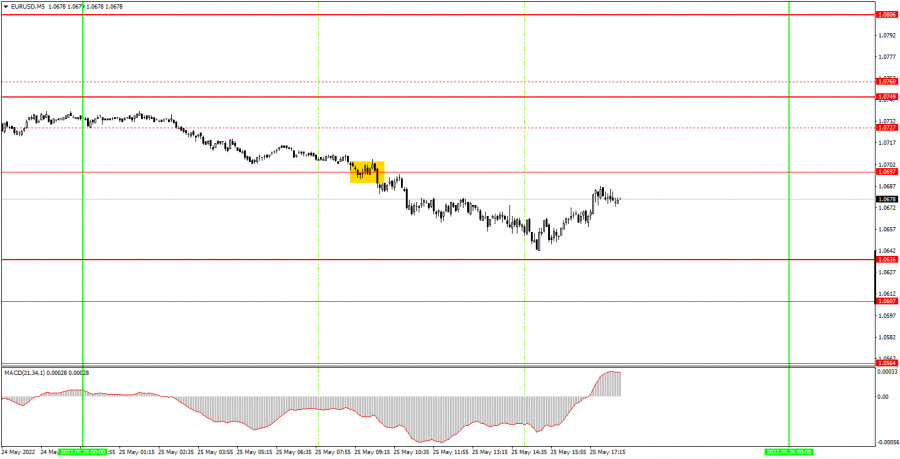 On the 5-minute time frame, everything looked pretty straightforward. The movement was smooth throughout the day, which is always good for beginners. Only one trading signal was formed. At the beginning of the European session, the price consolidated below the level of 1.0697. Then, it almost dropped to 1.0636 but missed 5 pips to reach it. So, there was no rebound and no more signal. Nevertheless, the pair went down by 40 pips. Even if beginners had to close this sell trade manually in the evening, they could still close it with a small profit. The levels of 1.0727 and 1.0760 lost their relevance, and the level of 1.0749 was formed instead. In general, the movement was good yesterday. We could have earned even more if more trading signals had been formed.

On the 30-minute time frame, the ascending trendline is still relevant. This gives the euro the chance to rise further although this moment will be mostly technical. This week, markets react even to minor economic reports, which also supports the euro. The dollar is unlikely to strengthen until the price settles below the trendline. On the 5-minute chart on Thursday, it is recommended to trade at the levels of 1.0607, 1.0636, 1.0697, 1.0749, and 1.0806. Set a Stop Loss to breakeven as soon as the price moves by 15 pips in the right direction. On Thursday, no major events are expected in the European Union. In the US, the second estimate of GDP for the first quarter and the data on initial jobless claims will be published. If the second GDP estimate differs from the first one, this may move the market, especially if the reading is lower. The Fed meeting minutes released yesterday could have caused a reaction among traders. Anyway, by that time, beginners should already have left the market.

Basic rules of the trading system

1) The strength of the signal is determined by the time it took the signal to form (a rebound or a breakout of the level). The quicker it is formed, the stronger the signal is.2) If two or more positions were opened near a certain level based on a false signal (which did not trigger a Take Profit or test the nearest target level), then all subsequent signals at this level should be ignored.3) When trading flat, a pair can form multiple false signals or not form them at all. In any case, it is better to stop trading at the first sign of a flat movement.4) Trades should be opened in the period between the start of the European session and the middle of the US trading hours, when all positions must be closed manually.5) You can trade using signals from the MACD indicator on the 30-minute time frame only amid strong volatility and a clear trend that should be confirmed by a trendline or a trend channel.6) If two levels are located too close to each other (from 5 to 15 pips), they should be considered support and resistance levels.

Support and Resistance Levels are the levels that serve as targets when buying or selling the pair. You can place Take Profit near these levels.

Red lines are channels or trend lines that display the current trend and show in which direction it is better to trade now.

The MACD indicator (14, 22, and 3) consists of a histogram and a signal line. When they cross, this is a signal to enter the market. It is recommended to use this indicator in combination with trend patterns (channels and trendlines).

Important announcements and economic reports that can be found on the economic calendar can seriously influence the trajectory of a currency pair. Therefore, at the time of their release, we recommend trading as carefully as possible or exiting the market in order to avoid sharp price fluctuations.

Beginners on Forex should remember that not every single trade has to be profitable. The development of a clear strategy and money management is the key to success in trading over a long period of time.