Analysis of transactions in the GBP / USD pair

GBP/USD reaching 1.2208 led to a sell signal in the market, however, there was no price decrease even though the MACD line was moving below zero. The second test was more successful as the pair fell by more than 30 pips by then. As for the buy signal that emerged when the pair hit 1.2165, it prompted a 50-pip increase in pound. No other signal appeared for the rest of the day. 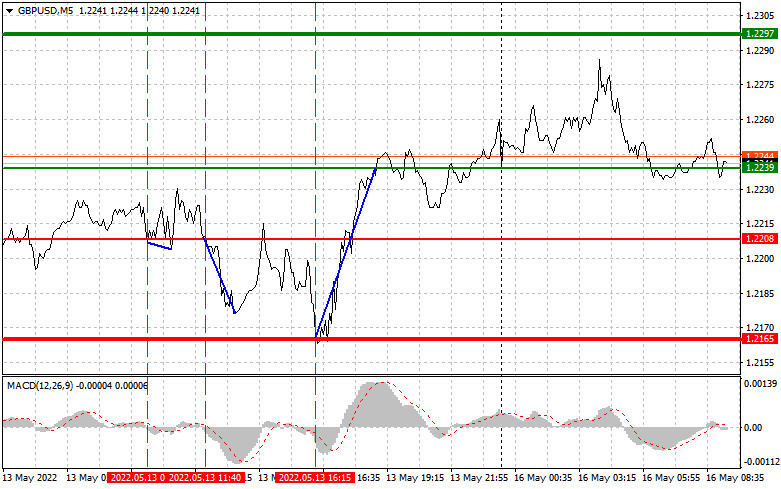 Friday's report on US CPI led to a correction in GBP/USD, which continued today during the Asian session. Most likely, this bullish trend will persist as there are no UK statistics scheduled to be published. But in the afternoon, parliamentary hearings regarding the Bank of England's monetary policy, as well as the speech of Andrew Bailey, could have a negative impact on the pound.

US data on the manufacturing index and speech of FOMC member John Williams are unlikely to shake the markets.

Buy pound when the quote reaches 1.2256 (green line on the chart) and take profit at the price of 1.2310 (thicker green line on the chart). There is a chance for a rally today, but only in the morning. Nevertheless, note that when buying, make sure that the MACD line is above zero, or is starting to rise from it. It is also possible to buy at 1.2223, but the MACD line should be in the oversold area as only by that will the market reverse to 1.2256 and 1.2310.

Sell pound when the quote reaches 1.2223 (red line on the chart) and take profit at the price of 1.2165. Pressure may return at any moment, especially if the statements of Bank of England Governor Andrew Bailey turns dovish. But note that when selling, make sure that the MACD line is below zero, or is starting to move down from it. Pound can also be sold at 1.2256, however, the MACD line should be in the overbought area, as only by that will the market reverse to 1.2223 and 1.2165. 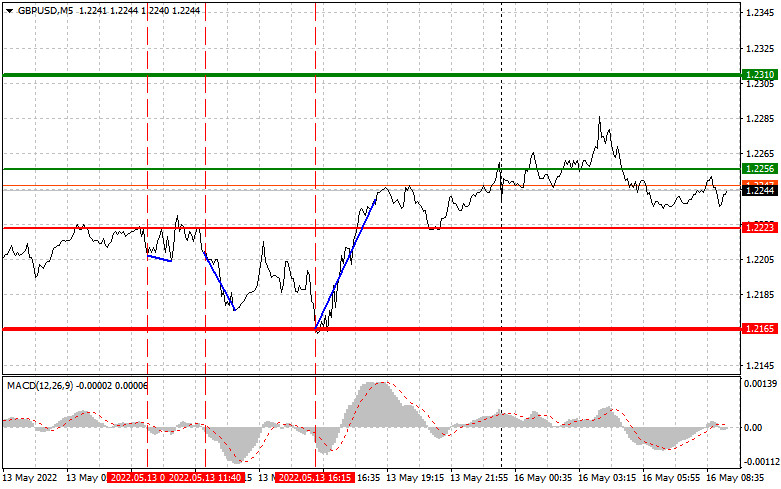 What's on the chart:

The thin green line is the key level at which you can place long positions in the GBP/USD pair.

The thick green line is the target price, since the quote is unlikely to move above this level.

The thin red line is the level at which you can place short positions in the GBP/USD pair.

The thick red line is the target price, since the quote is unlikely to move below this level.

MACD line - when entering the market, it is important to be guided by the overbought and oversold zones.

Important: Novice traders need to be very careful when making decisions about entering the market. Before the release of important reports, it is best to stay out of the market to avoid being caught in sharp fluctuations in the rate. If you decide to trade during the release of news, then always place stop orders to minimize losses. Without placing stop orders, you can very quickly lose your entire deposit, especially if you do not use money management and trade large volumes.

And remember that for successful trading, you need to have a clear trading plan. Spontaneous trading decisions based on the current market situation is an inherently losing strategy for an intraday trader.